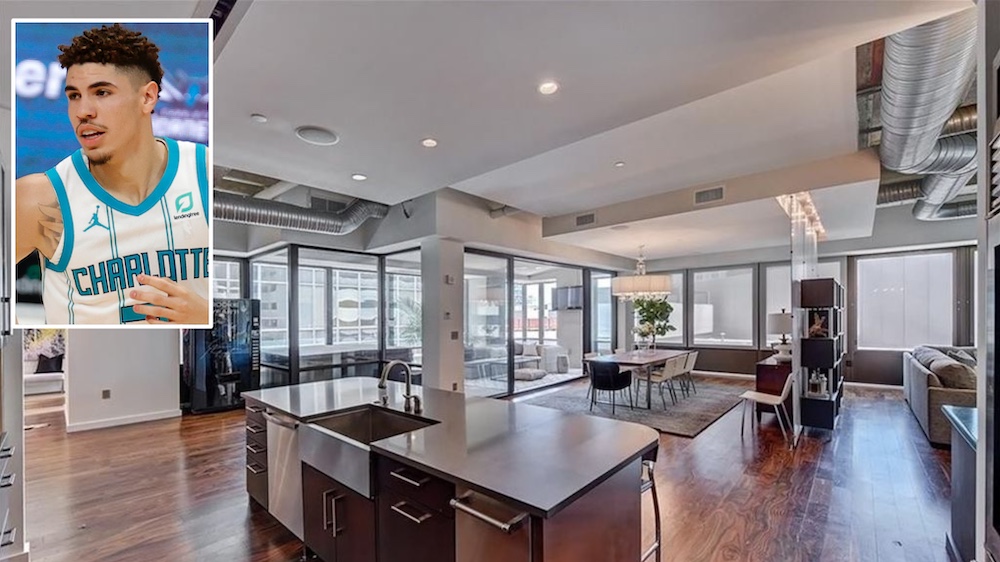 The heavily hyped hoopster has moved into a condo owned by Cam Newton, the New England Patriots quarterback, according to Triangle Business Journal.

A report on social media seemed to fuel the headlines.

Cam Newton put his Charlotte digs on the market in July and now thereâs a new tenant – LaMelo Ball.

Newton bought the unit for $1.6 million in 2012, about a year into his tenure with the Carolina Panthers.

With his career in Charlotte coming to a close, Newton first placed his unit on the market in 2019 for $3.2 million. After signing a free-agent deal with the New England Patriots, he then relisted the home over the summer for just under $3 million. The price was then sliced again in November to $2.6 million.

There’s no evidence of a sale, and the property is still held by an Atlanta LLC connected with the quarterback. So instead of waiting for a buyer to emerge, Newton probably called an audible and struck a deal with the teenage hoops prodigy to lease the place.

Off the court, Ball can now familiarize himself with the Uptown neighborhood. The posh pad is located in a boutique building called The Trust, whose modern charms have appealed to athletes and celebrities who prefer an exclusive address in the Queen City.

The NBA legend Michael JordanÂ (and majority owner of the Hornets) has reportedly occupied the entire seventh floor. And the rocker Chris Daughtry, of “American Idol,” purchased a unit in 2014, according to the Charlotte Agenda. With just seven luxe residences, the building offers ample privacy.

It’s quite a score for the 19-year-old. The spread, fit for a star, offers three bedrooms and 3.5 bathrooms on 3,335 square feet, and occupies half of the fifth floor.

Noted details of the modern design include an open living and dining space, as well as a state-of-the-art kitchen with Sub-Zero, Bosch, Miele, and Wolf appliances. A “Zen-like” master bedroom retreat with a spa bath boasts an enormous walk-in closet. Other perks include a wet bar and a glassed-in solarium. The property also comes with a Crestron home automation system.

There’s been no word whether the Cam Newton Pepsi machine remains in place.

Ball was selected by the Hornets with the third overall pick in the 2020 NBA draft. He has two older basketball-playing brothers: Lonzo, who stars with theÂ New Orleans Pelicans, andÂ LiAngelo, currently in the NBA G-League. LaMelo has a signature shoe with Big Baller Brand, the company of his father, LaVar. He also has a role on his family’s reality show on Facebook Watch, “Ball in the Family.”

Newton was represented by Shane McDevitt, with The McDevitt Agency.